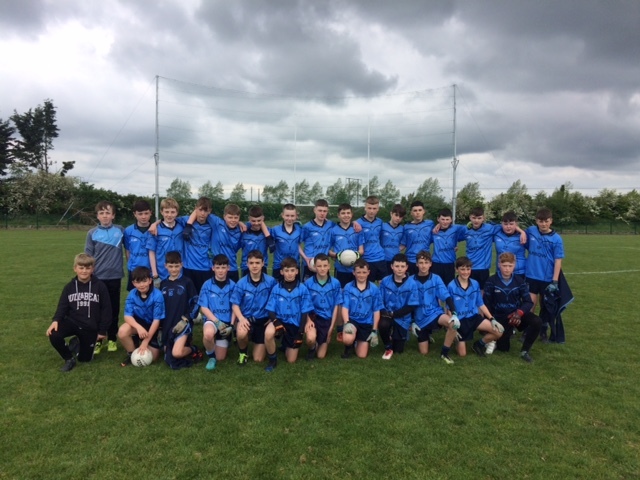 Published: over 1 year ago

The Eadestown boys fell short in their brave attempt to retain the Kildare Feile C title last Sunday morning, losing to a very strong Balyna side in Hawkfield.
The score doesn’t do justice to the effort however.   A catastrophic start saw our lads trailing by 4-1 to 0-0 after less than 10 minutes and the signs were ominous. However, the team showed what they were made of and fought back brilliantly from there. Goals by Adam Delaney  Patrick Foley and Charlie Carroll and lovely points by CJ Boran, Liam Brannelly meant that, unbelievably we drew level at 3-4 to 4-1, and the half time whistle was a relief to Balyna and halted our momentum.

In truth, the level of effort to get back into the game took its toll on the lads, as Balyna pushed on again early in the second half and tiredness overcame our boys.  It is to their great credit that they battled on looking for scores right to the end, and but for a couple of 50/50 called that went against us, the score would have been much tighter. A few times in that second half it looked like Balyna might pull away, but our lads found the resolve to claw them back over and over again, and kept asking questions right to the end.
Liam Brannelly and Adam Delaney carried the game tirelessly to Balyna from midfield all day long, while Paul Gavin, Fionn O’Connor and Jack Morrin did their best to lift the siege in defence in the absence of the injured Ardin Magee. Up front Charlie Carroll took his scores well, and the hard work of Patrick Foley, James Bedford & CJ Boran caused Balyna problems all through the game.

Despite the obvious disappointment, it has been a great year for this team, and they can be very proud of their Feile performance. We started the year as absolute outsiders for the title, so to top our group, defeat several teams that had designs on the title along the way, and still be standing strong on the last day speaks volumes for the strength and character of the lads.  Onwards and upwards for this squad.

Eadestown GAA are delighted to welcome the publication of...

Due to recent developments this evening in relation to lo...

Covid 19 Reminder re Travel We would like to take this op...