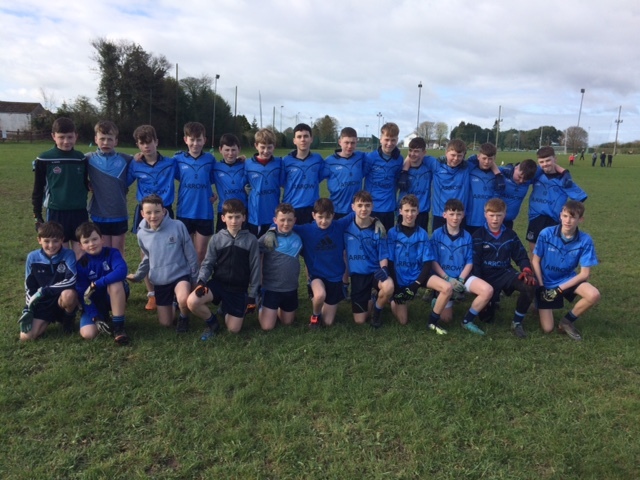 Published: about 2 years ago

After a bye in the first round, our boys Feile team got their campaign off to a great start with a big win over rivals Ellistown on a truly awful day. Playing into the wind, rain and sleet in the first half, a great team move the length of the field was dispatched to the net by Charlie Carroll to settle the nerves early on. Hard work by backs and forwards alike kept Ellistown at bay for long periods, and further goals by Liam Brannelly and Adam Delaney gave us a nice lead to bring into the second half.  Paul Gavin, Ardin Magee and Aaron Grainger led by example at the back, while CJ Boran and Joseph Carter made possession count when it mattered in attack.  We pressed home our advantage impressively in the second half, with some lovely fast movement that had Ellistown in trouble constantly. James Bedford, Andrew Curran & Calum Murphy drove us forward all through the second half, and Jack Dennis, Tom Boran, and Ben Nicholl added to our goal tally as Ellistown wilted under the pressure. Stephen Grainger, Johnny Harney and Cian Cahill all made excellent contributions from the bench when introduced in the second half, and a special mention for Kier Grainger who, despite a serious foot injury which kept him off the match day squad, worked manfully as a water boy in the awful conditions.
In the end we deserved our big win, but there will be bigger challenges ahead.

The drive to retain our Feile C title stayed on track with a comprehensive win over Rathangan.  After a slow start Eadestown charged into the game and four goals without reply, one from Charlie Carroll and three from Patrick Foley (who ended up with a personal tally of 4-2 for the day)  put us well in control before the break.  It could have been very different though except for an excellent point blank save from Hughie Doyle when the game was still in the balance early in that first half.  Paul Gavin dominated the edge of the square all day, ably assisted by Oisin Dillon and Aaron Curtin, and strong running from half backs Jack Morrin and Robert Molloy kept us on the front foot all day.  After the break we pulled further clear with goals by Liam Brannelly, Adam Delaney, and further score from Jack Dennis, Tom Boran put plenty of daylight between Eadestown and the hosts long before the final whistle.
James Bedford &CJ Boran worked tirelessly all day long, and Charlie Croke, Isaac Devine & Fionn O'Connor made telling contributions from the bench as the game wore on.

Rian Boran leading the way for the lillies against Wicklo...

Rian leading the way for the lillies against Wicklow in 2...